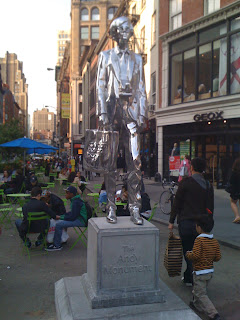 On view this summer only in NYC's Union Square is "The Andy Monument", dedicated to the King of Pop Art, Andy Warhol. The shinning silver statue, as reflective as the inside of the fabled Factory, and as superficially appealing as much of the work created by the late showman, makes a great statement among the sidewalk tables on what used to be Broadway, and now is a pedestrian area. Viewing the piece form a distance, it almost looks like a ghost, mingling among the crowds, only a few steps from his studio where some of the most infamous moments in NYC art played out, including Warhol being shot by Valerie Solanas.

The artist behind this work is Rob Pruitt, a Pop artist himself, who has added another noteworthy monument to the streets of the city, so that aspiring artists can look and remember that it happened here.

I think Andy Warhol would be proud of his gleaming likeness, slightly elevated, and carrying proof of one of his favorite past-times - the shopping bag. As tourists stop to have there photograph made in front of the sculpture, I notice Andy's omnipresent camera hanging around his neck, ready to document when inspiration strikes, and for a second I think I see him smile.
Posted by Alton On The Spot at 3:30 PM