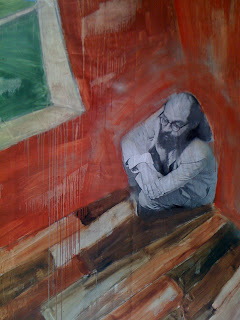 Sunday was the annual Howl! Festival in Tompkins Square Park.  I am a long-time fan of Allen Ginsberg, and like many, feel that his seminal poem Howl! was pivotal for free speech. Reading the poem in college, I felt a sense of liberation, and the permission to explore myself creatively and sexually without apology. Of course, Ginsberg was still alive then, and living in the East Village.

The East Village has long been home to artists and bohemians. When I first visited NYC, I was not yet 20, and crashed at an artists' compound near Tompkins Sqaure. The park at that time was tent city, with homeless and prostitutes and drug dealers mingling with poets and painters. Having arrived fresh off the bus from my tiny hometown of Splendora, and already self-identified as an artist, I was enraptured in the exotica of it all. Well, NY has been cleaned up considerably since then, but on occasion, like the Howl! Festival, one can get a glimpse of what it once was, before Giuliani, before rent-flation, before September 11th - not that I am pining for the past - oh no, far from it - just fondly recalling.

Apropos to my first beholding Gotham City (or Sodom and Gomorrah as the case may be!), would be that this past weekend, I was entertaining a friend on his first trip to Manhattan, the 20 year old Michael James, also from Splendora. Besides the bars of Chelsea, I gave him the full walking tour, down the Highline, along the Hudson River Park, Christopher Street pier, across the West Village, through SOHO, lunch in Nolita, and arriving in Tompkins Square just in time for a few drinks and the Low Life (presented by the Jackie Factory) portion of the festival. 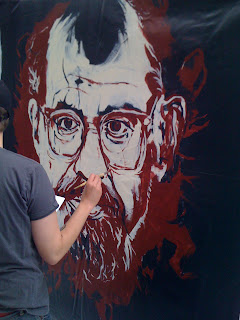 The perimeter of the park was wrapped in canvas, where artists were hard at work expressing both angst and creativity. The park was full of weirdos as only the East Village can provide. And then there was the stage show of drag queens, go-go boys, musical numbers, dance routines, voguing, and more. The crowd was full of colorful characters, many of whom I knew from past lives, most still friendly enough to say hello. And although a lot of it smacked of nostalgia, there was still the atmosphere of freedom, of self-expression, of eccentricity.

And everywhere I looked, was Mr. Ginsberg. Smiling forth from countless paintings throughout the park, in the demeanor of the oddballs and perverts congregating about, in the spirit of the few fools still brave enough to write poetry, and in the face of my young friend who perhaps, for a fleeting moment, could imagine what NYC once was and still is - a city of countless individuals, doing their own thing, free to express themselves as they see fit, a place where anything can happen. 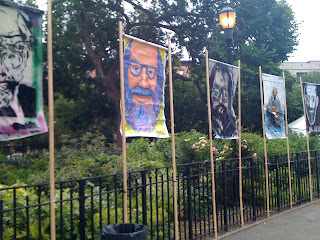