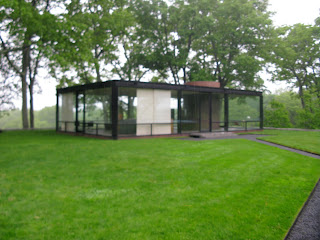 On a recent rainy day in May, I made the short 2 hour pilgrimage on the Metro North to the architectural wonder known as the Glass House in New Canaan, CT. It was well worth the jaunt and the inconvenience of the rain to marvel at this masterpiece in modernist design.

The rain, in fact, was a blessing in disguise, as all the other participants in the tour canceled, leaving only me, my traveling companion Andre', and the tour guide. Basically we had the entire estate to ourselves, to roam the grounds, explore the buildings, and (on my part) to imagine living there myself! 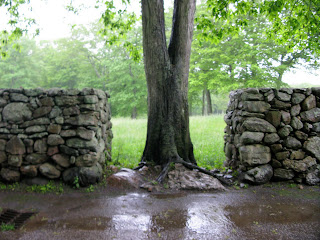 The 49 acre estate contains 14 structures, including a small study, world class architecture, several galleries, and of course, the eponymous glass structure with its guest house and pool.

The Glass House, created in 1949 by Philip Johnson, is amazing in its simplicity and austerity. Elegantly furnished with works by his friend Mies van der Rohe, with one of my favorite furniture designs, the Barcelona Chair. It is amazing to be able to walk through the house where Johnson lived and entertained art luminaries of the last century, to see where they sat and ate and discussed concepts, philosophies and artistic movements, and imagining the salons that took place there on that grassy lawn. 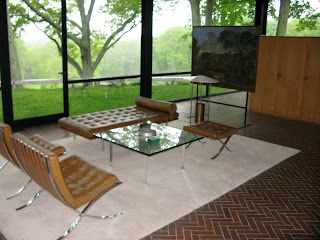 We were also granted access to the galleries containing containing an amazing collection of Frank Stella and countless other artists including Warhol, Chamberlain, and Rauschenberg. Johnson built his art collection, and shared the estate with his partner of 40 years, David Whitney, though they never officially lived together. Even though there was more than 30 years difference in their age, they died within six months of each other, leaving behind an architectural and artistic treasure.

It is a great day trip from NYC, and something I recommend for every lover of architecture and modern design. 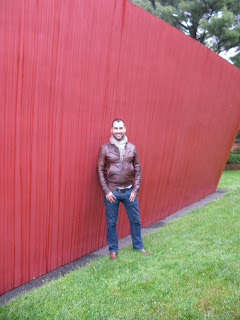 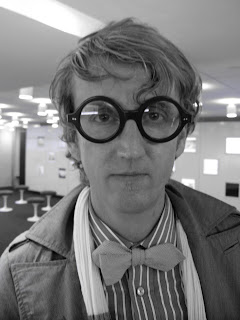 Alton DuLaney modeling the Philip Johnson glasses.
Posted by Alton On The Spot at 4:15 PM